Adventures in Sourdough, Week One

One of my big kitchen goals for 2019 was to create and maintain a sourdough starter. I’ve been baking bread for years, but always using store-bought yeast. This is my first foray into the world of naturally leavened breads and other treats. Join me for my adventures in sourdough, starting right here with week one. 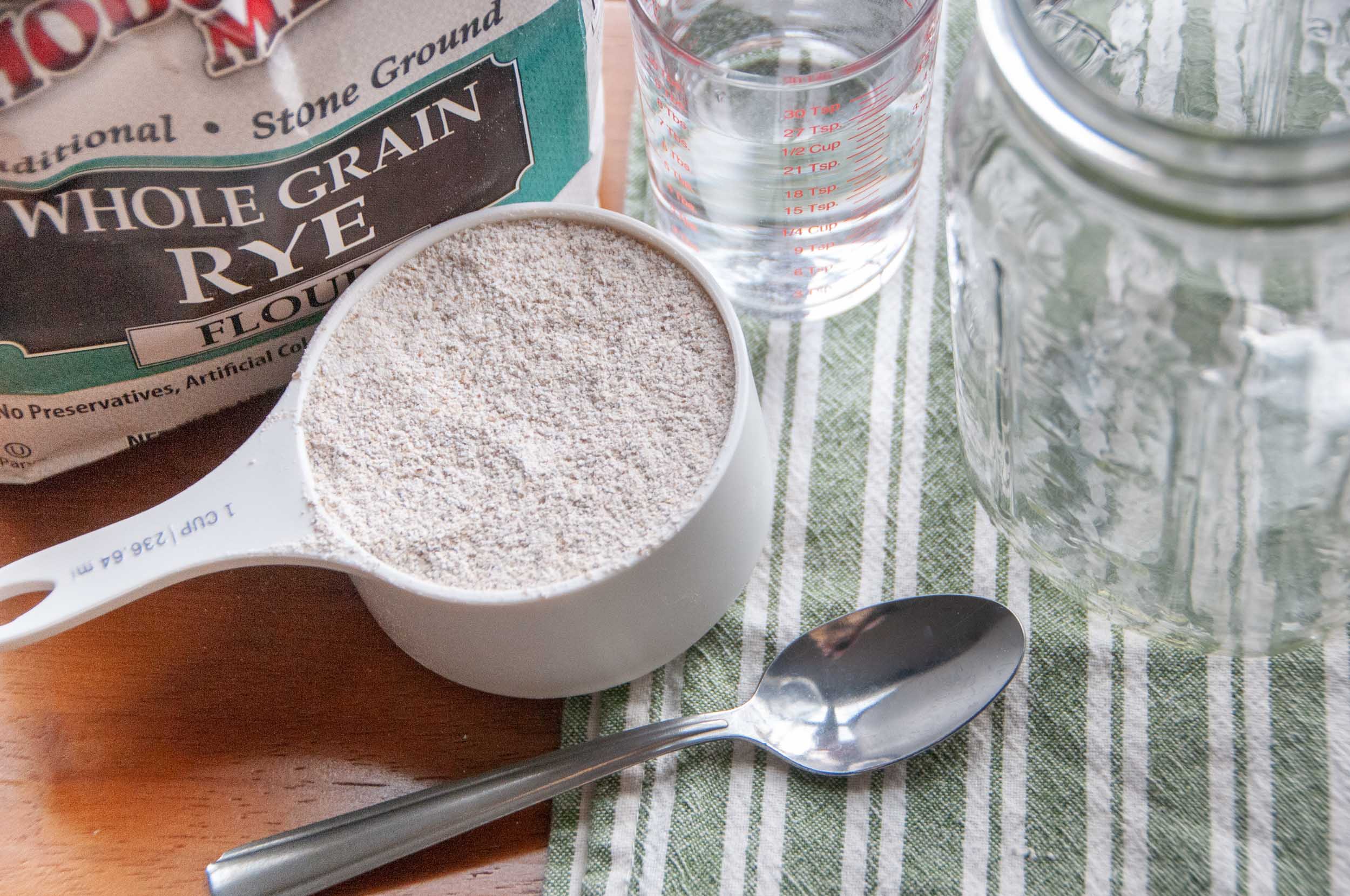 I read through a few different sources to get myself ready to start. My track record for keeping plants alive is not great, so I wanted to be fully prepared when it came to my sourdough starter. I’ve learned some new terms like “levain” and “mother source,” and I feel as prepared as I can be.

My favorite resources for the beginning stages have been:

Getting Started with Sourdough

I decided to just dive right in. At some point, you can do all the reading in the world, but you’ll reach a limit. You need to actually do the work to really achieve anything.

I started my sourdough starter with just under 1 cup of rye flour, and just over half a cup of room temperature water. Then, I mixed it well in a large glass jar, covered it loosely, and placed it on top of the fridge.

I put a piece of tape with a line on the side of the jar, so I could tell when it increased in size. Many of the guides I’ve read mention the starter “doubling” in size, and I wanted to make sure I had a reference point.

The first day, my starter doubled in size, and I was so excited! It was really working. But after that, it settled down quite a bit. By day four, I wasn’t seeing a ton of increase which started to worry me.

Luckily, I had read that a slump is normal, as the bad yeast and bacteria die off, and that makes room for the ones we really want in the sourdough bread. I’m not great with patience, but I kept up regular feedings, and even did a whole wheat feeding one night to see if that could give it a boost.

As of now, it’s still only growing about 25-50% between feedings. This could be because my kitchen is a little bit cold, or a number of other reasons. The whole wheat did boost it to about 60% growth, so I may try that again soon.

It’s been hard for me to throw away the discard – all that perfectly good flour down the drain! So, I’ve been researching ways to use the discarded start to make some yummy treats.

The first thing I made were biscuits, by just adding more flour and plenty of butter. I used used this recipe from King Arthur Flour, but I modified them into drop biscuits instead of rolling out.

Next, I made some crackers. I didn’t really use a recipe for these. I just added half the weight of the discard starter in extra flour, mixed in some everything bagel seasoning and olive oil, and baked until crunchy. These came out delicious, and I’ll definitely play around with that recipe a bit more to perfect it.

I’m thinking I could use more to make some bagels, pretzels, or other tasty treats. I’d love to use discard starter to make a biscuit topping for a cobbler come fruit season. Or maybe I could use it in a pie crust? It sounds like some experiments await me.

10 thoughts on “Getting Started with Sourdough”

This website uses cookies to improve your experience while you navigate through the website. Out of these, the cookies that are categorized as necessary are stored on your browser as they are essential for the working of basic functionalities of the website. We also use third-party cookies that help us analyze and understand how you use this website. These cookies will be stored in your browser only with your consent. You also have the option to opt-out of these cookies. But opting out of some of these cookies may affect your browsing experience.
Necessary Always Enabled
Necessary cookies are absolutely essential for the website to function properly. These cookies ensure basic functionalities and security features of the website, anonymously.
Functional
Functional cookies help to perform certain functionalities like sharing the content of the website on social media platforms, collect feedbacks, and other third-party features.
Performance
Performance cookies are used to understand and analyze the key performance indexes of the website which helps in delivering a better user experience for the visitors.
Analytics
Analytical cookies are used to understand how visitors interact with the website. These cookies help provide information on metrics the number of visitors, bounce rate, traffic source, etc.
Advertisement
Advertisement cookies are used to provide visitors with relevant ads and marketing campaigns. These cookies track visitors across websites and collect information to provide customized ads.
Others
Other uncategorized cookies are those that are being analyzed and have not been classified into a category as yet.
SAVE & ACCEPT
39 shares
Loading Comments...