I’m a purist when it comes to naming my baked goods. If I’m eating something, I don’t care what you call it as long as it’s delicious. But when it comes to my own, I have to make sure I’m using the right terminology, especially for fruit bakes.

Cobblers, crumbles, and crisps are the most common ones that you’ve probably heard of, and possibly heard thrown around interchangeably. But do you know about buckles or pandowdies?

The differences, you’ll find, are mostly in the structure and the ingredients of the pastry. In most cases, any fruit or combinations of fruits can be used in any of these, but some lend themselves better to different types. Buckle up, because I’m breaking them all down.

We’re starting off with a softball here, but pies have their own world of different types. Since we’re discussing fruit bakes, I’m sticking to fruit pies here. Pies are made with a flaky crust that’s rolled out. In most cases, a fruit pie will have a double crust, but there are some notable exceptions, like a dutch apple or lemon meringue pie.

My favorite: Dutch Apple Pie from The Brown Eyed Baker

A tart is a lot like a pie, but without that top crust. Tarts are generally more shallow than a pie, and baked in a dish with straight instead of sloped sides. They are usually removed from the pan before serving, and tend to have a more crumbly crust than a pie.

A galette is like a more casual pie. Instead of a pie pan, galettes are baked on a sheet pan. The crust is rolled out and topped with filling, and then the edges of the crust are folded over top. They don’t have a specific shape, and are the easiest to make of the three.

My favorite: Rustic Pear Galette with Walnut Crust from Feasting at Home

A pandowdy is another more casual version of a pie. These don’t usually have a bottom crust at all, and are often baked in a cast iron skillet. The top crust is there, but normally broken down, either by cutting it into pieces before topping the fruit, or by rolling out the crust and then cutting it apart once on top. 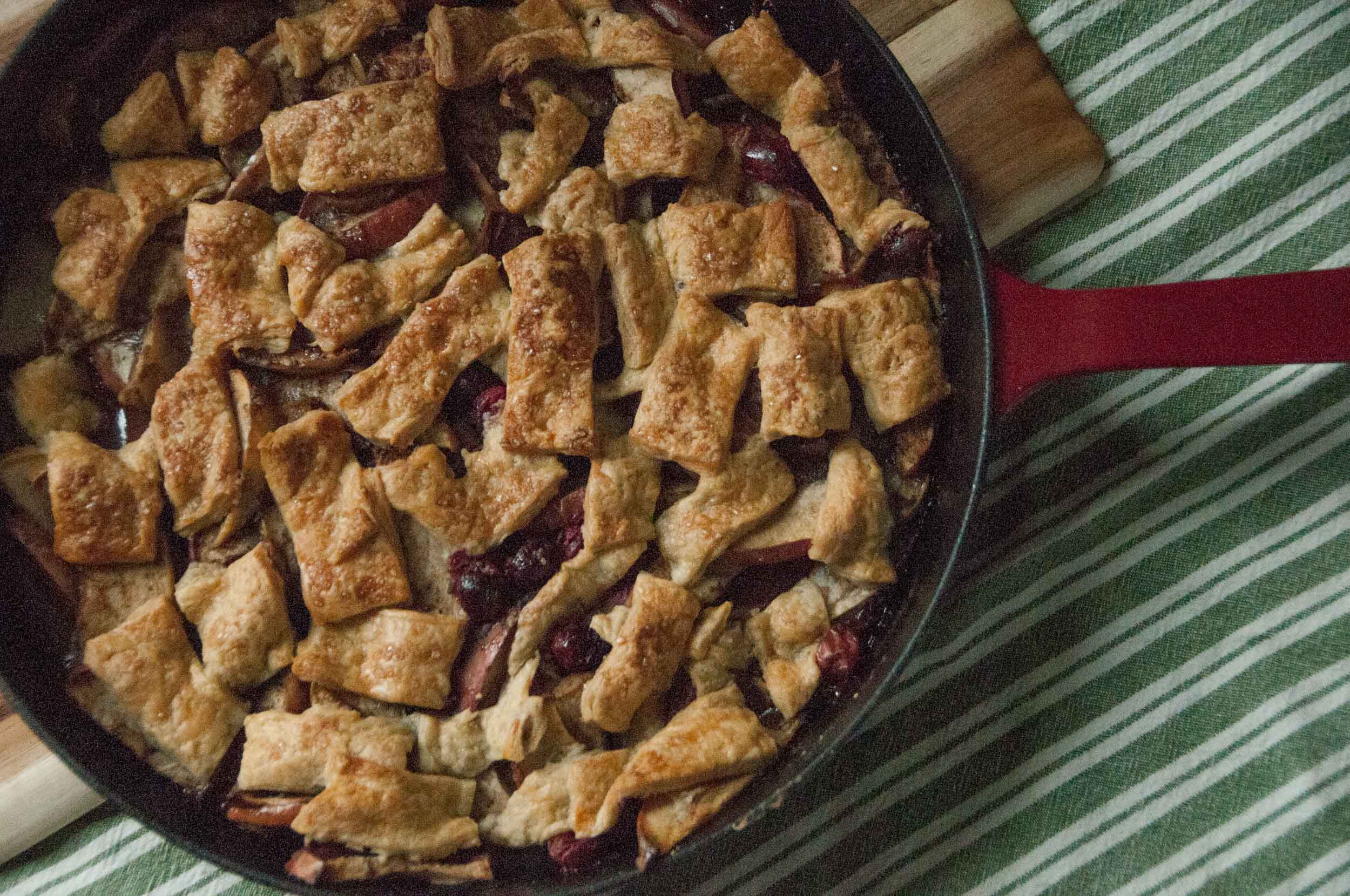 A crumble is your basic easy-mode fruit bake. These are super quick to throw together, since they involve only the fruit filling on the bottom of a casserole dish, and the simple streusel topping (made from flour, brown sugar, cinnamon, and butter usually) sprinkled generously over top.

My favorite: Roasted Rhubarb and Vanilla Crumble from The Spruce Eats

A crisp is almost exactly the same as a crumble with one difference: crisps contain oats and crumbles do not. When the streusel filled with thin rolled oats bakes up in the oven, it creates a crispier texture, hence the name. A lot of people use these terms interchangeably, since it’s such a small difference, but the oats can make a big difference in taste!

My favorite: Sit and Stay Awhile Apple Crisp from Joy the Baker

A buckle kind of feels like a coffeecake. It uses cake batter, fruit filling, and a streusel topping. When these bake, the fruit and streusel weigh down the cake, so it collapses or buckles in the middle. People will call these crumbles or cobblers sometimes.

A betty contains bread crumbs or bread pieces in its streusel You might have heard of apple brown betty, which is the classic version of this type of bake. A betty also tends to be layered, instead of just fruit then topping, you get a few levels of fruit-topping-more fruit-more topping.

My favorite: Apple Brown Betty from The Pioneer Woman

A cobbler is a traditional southern fruit bake. Instead of crust or streusel, now we’re thinking with biscuits. The biscuit dough is normally dropped on top of the fruit filling, which gives the top a coarse or “cobbled” appearance, as opposed to a smooth pie.

These are the same! And they are very similar to a cobbler. The major difference is that a grunt or slump is cooked entirely on the stovetop in a covered pan, and never even enters the oven. The name grunt could come from the bubbling sound it makes while cooking. A slump is sometimes served inverted, with the biscuit topping on the bottom.

Got all that? Don’t worry, there won’t be a quiz. And if you keep calling everything a crumble, I’ll still come over and eat it. But now when you hear these words like pandowdy and grunt, you’ll know it’s going to be a delicious fruit bake!

This website uses cookies to improve your experience while you navigate through the website. Out of these, the cookies that are categorized as necessary are stored on your browser as they are essential for the working of basic functionalities of the website. We also use third-party cookies that help us analyze and understand how you use this website. These cookies will be stored in your browser only with your consent. You also have the option to opt-out of these cookies. But opting out of some of these cookies may affect your browsing experience.
Necessary Always Enabled
Necessary cookies are absolutely essential for the website to function properly. These cookies ensure basic functionalities and security features of the website, anonymously.
Functional
Functional cookies help to perform certain functionalities like sharing the content of the website on social media platforms, collect feedbacks, and other third-party features.
Performance
Performance cookies are used to understand and analyze the key performance indexes of the website which helps in delivering a better user experience for the visitors.
Analytics
Analytical cookies are used to understand how visitors interact with the website. These cookies help provide information on metrics the number of visitors, bounce rate, traffic source, etc.
Advertisement
Advertisement cookies are used to provide visitors with relevant ads and marketing campaigns. These cookies track visitors across websites and collect information to provide customized ads.
Others
Other uncategorized cookies are those that are being analyzed and have not been classified into a category as yet.
SAVE & ACCEPT
206 shares
Loading Comments...