Inspiration can come from many different places, but I’ll admit that I get a lot of ideas from Disney. As a kid, my sister and I would often determine our Halloween costumes from the parades at the parks. (And back then, it was not easy to find Christmas lights for my light-up dragonfly costume in October!) So it should be no surprise that the original spark for this savory cheesecake with caramelized onions recipe would come from a Disney cruise ship. 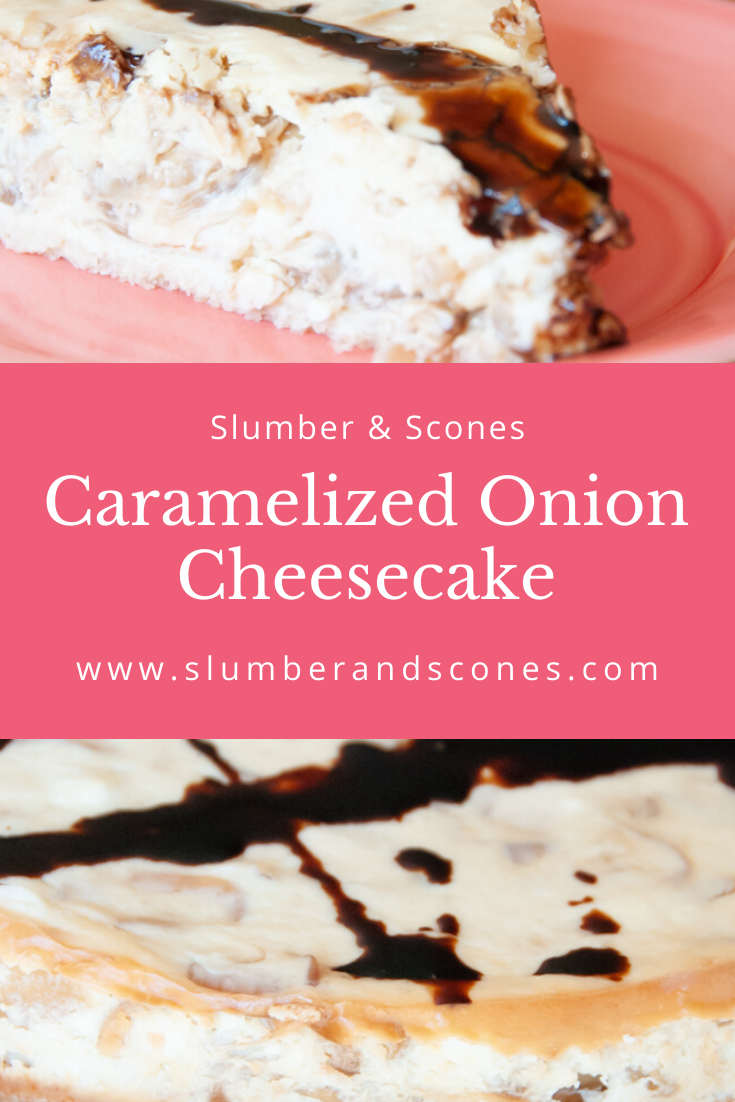 The original recipe I was inspired by was from the Animator’s Palette on the Disney Dream. It was a super unique restaurant where the room started black and white, and then became colorful throughout the meal. The food was all creative and interesting. And one of the dishes was a sesame shrimp and caramelized onion cheesecake. I made some adaptations so it has more of a brunch, but I’ve got to give credit for the concept.

What You Need to Get Started 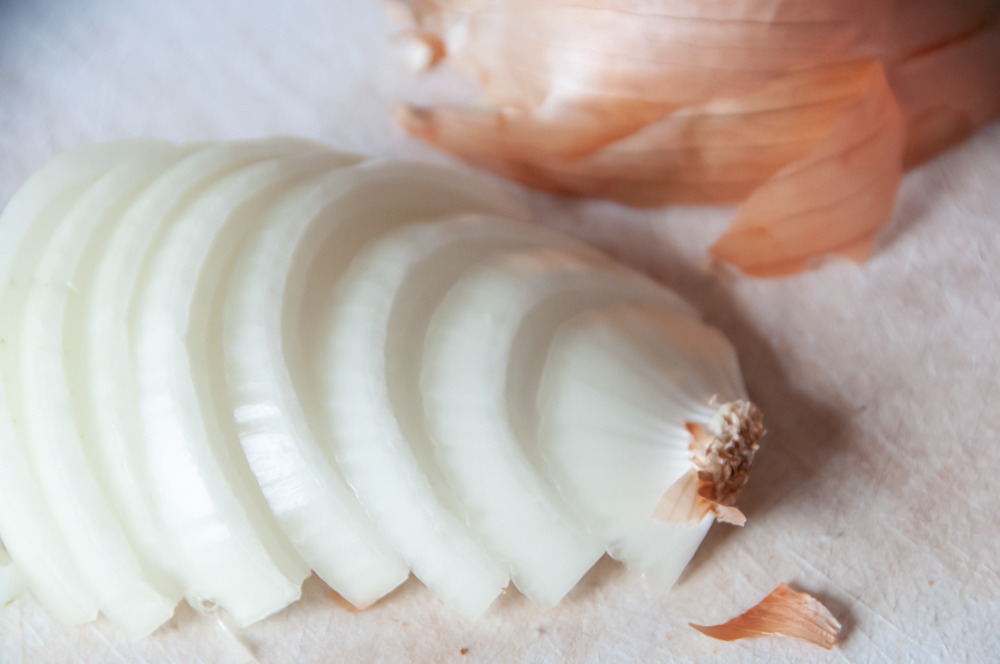 How to Make Caramelized Onions

The main tip for making perfect, sweet, jammy caramelized onions is patience. Patience and low heat. Sure you can make them faster by adding sugar, or letting them brown up quicker. But the flavor and texture of perfectly and slowly browned onions is incomparable.

To start heat some oil in a frying pan on medium-low heat. I like caramelizing onions in olive oil. I think it imparts the best flavor and is less likely to burn than butter. Once the oil is hot, you can add in the onions. Season will a little salt and pepper and stir to get them all coated.

You will cook them, stirring occasionally for about 4-5 minutes, until they begin to get soft and translucent. Then, to speed up the softening process a bit, I like to steam them. Add just a bit of water and cover for another 4-5 minutes, which will keep more heat and steam in the pan. 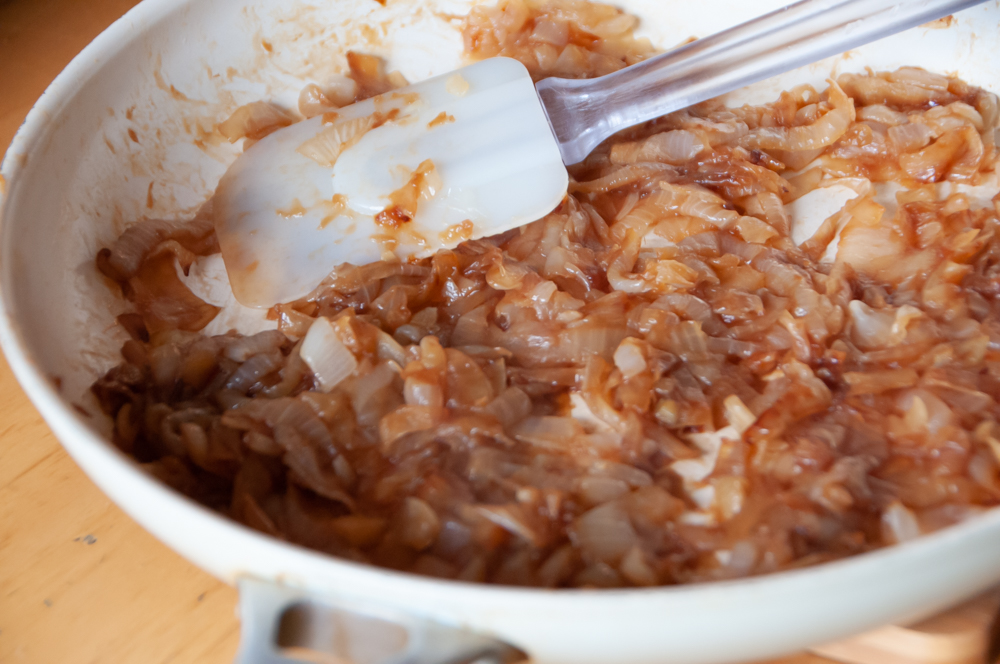 After that cook uncovered. You can check the onions every five minutes or so until they are dark brown and very soft. Give them a stir each time, and if they are starting to stick to the pan, add a splash of water to deglaze and get all of those yummy browned bits off the pan.

Once they are the perfect softness and shade of dark brown, you will want to deglaze the pan one last time. And this time, you’ll use balsamic vinegar to add a little extra touch of sweetness to the onions. Turn off the heat, and let the onions cool to room temperature while you prepare the rest of the cheesecake.

A savory cheesecake isn’t that different from a sweet one. Cheesecake itself is not super sweet, and has a really nice tang to it already. However, there are a few small swaps and adjustments you can make when you know it’s meant to be savory. 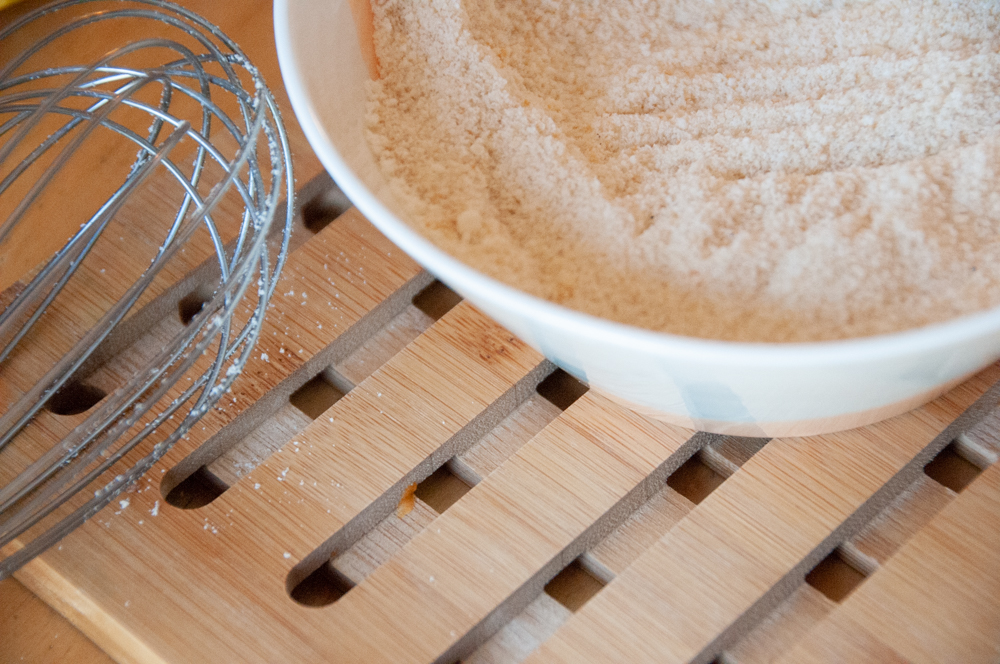 First is the crust. Instead of your standard graham or cookie crust, we are using bread crumbs and grated parmesan cheese. Combine them in a bowl with some salt and ground black pepper. Then add some melted butter, and press into the bottom of a spring form pan. Bake this by itself for about 10 minutes, to dry out the butter and start melting the cheese.

To make the cheesecake filling, the easiest method is to use softened cream cheese and a stand mixer. Whip up the cream cheese first, and then mix in the eggs one at a time. You’ll mix in the sugar, but it’s not a ton, only 1/3 cup in the whole cheesecake. 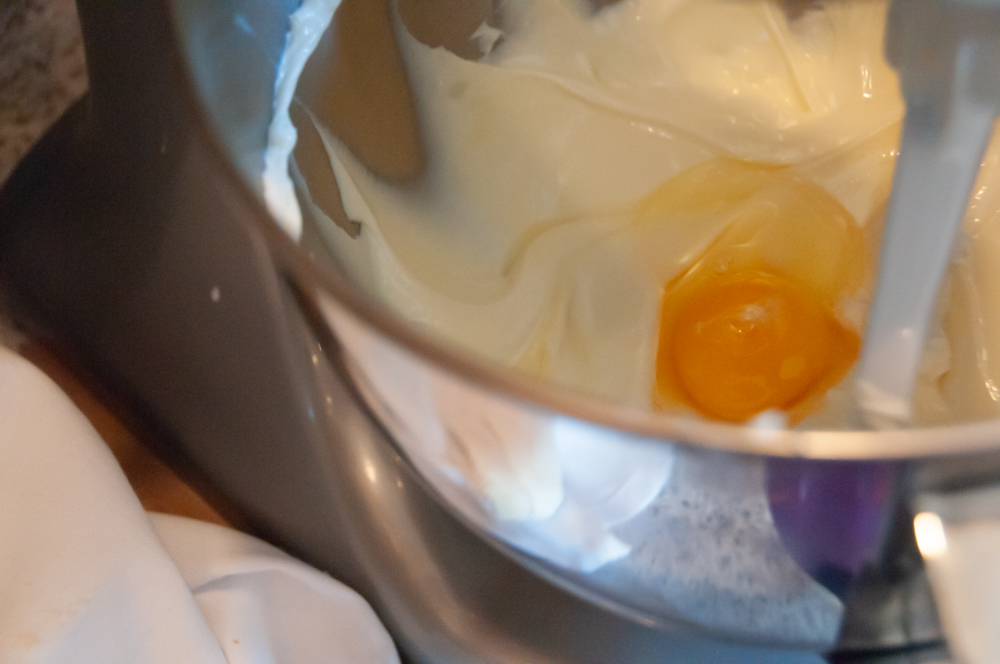 Once everything is mixed, add in the onions and goat cheese and mix on low to combine. Pour all of the filling on top of the crust in the pan. And it’s ready to bake!

You can bake this is a water bath, but I like to use a little bit of a cheating technique. I place a 9×13 pan on the lower rack of the oven, and fill it with boiling water. Then, I put the cheesecake on the upper rack to bake. This creates some steam, for a more even cook. But if you don’t have a large enough pan for a water bath, you can still make perfect cheesecake. 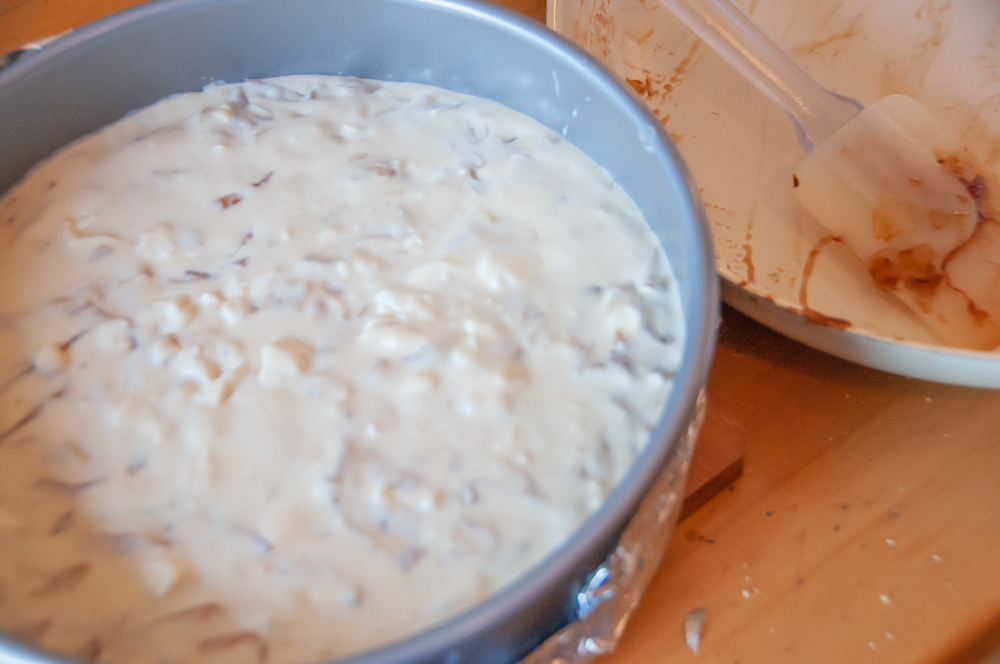 It cooks for about 40 minutes, and you’ll know it’s ready when the edges start to pull away from the pan and you can see some browning. The middle may have a little bit of a jiggle, but it shouldn’t look liquidy.

Cool the cheesecake all the way to room temperature on a cooling rack. Then transfer it to the fridge, covered in plastic wrap. It should chill overnight for the best results, but at least eight hours, so it’s cooled throughout. You can then remove the outer ring of the pan. 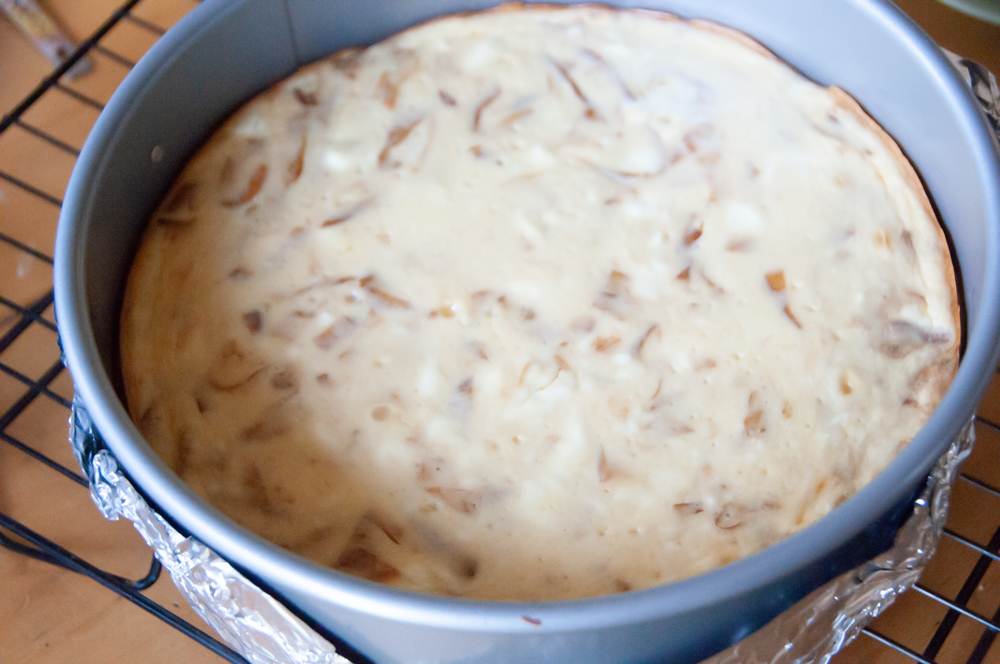 In the morning, quickly whip up the balsamic drizzle. You just cook the balsamic vinegar stirring occasionally, until it has reduced and thickened significantly. It should be only about 1/3 of the volume you started with. I like to have a heat-proof measuring cup nearby to check the reduction level. Let it cool slightly, and then drizzle over the cheesecake. Slice and serve!

Try something a little different for brunch, when you make this savory cheesecake with caramelized onions and balsamic!

What Does it Mean to Caramelize Onions?

In their raw state, onions have a very sharp and harsh flavor. But when you add a little heat and patience, the result is an incredible sweet and jammy treat. It’s a chemical reaction that happens to the sugars within the vegetable, because of the heat. However, add too much heat too quickly, and you will end up with crispy or burnt onions instead.

When you first start cooking the onions, they will release a lot of water. This is why they sweat and significantly shrink. This begins to soften them, but they won’t start to brown until enough water has boiled off to begin heating the sugar at higher temperatures. When they caramelize, the larger sugar molecules break down into simpler one, and that’s why they taste so much sweeter! 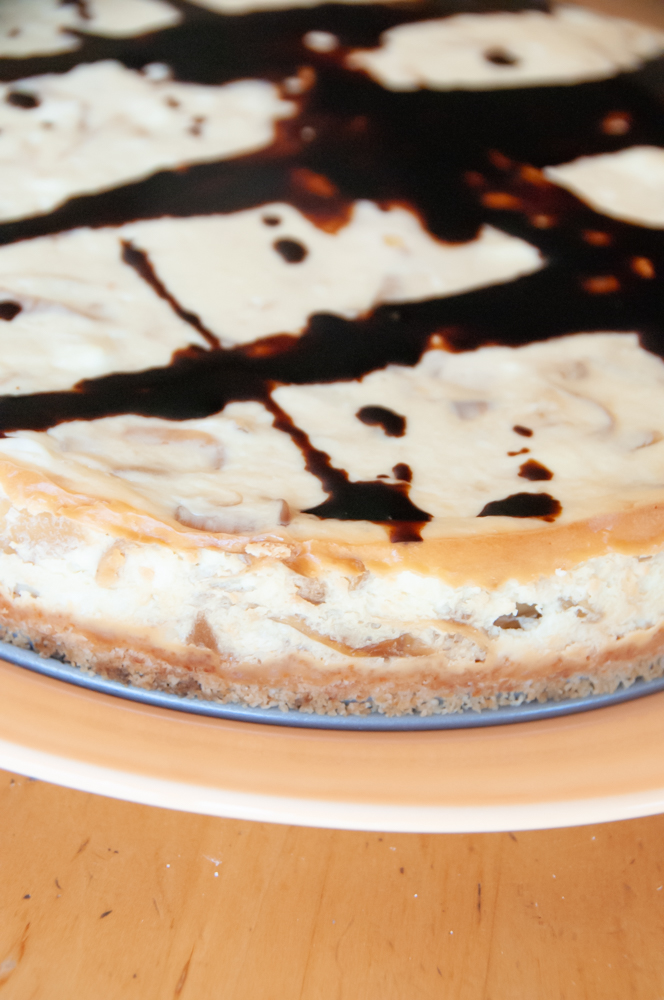 How to Serve Savory Cheesecake

This cheesecake serves eight, but can be stretched to twelve for smaller portions that are more of a side dish than the main event. It’s best served immediately, or you can store it covered in the fridge for 3-4 days. To cover, add some toothpicks to the cheesecake, and place plastic wrap over those, so it’s not directly touching the cake.

We enjoyed this for breakfast, but you can also have it as a side dish with lunch or dinner, and it would make a perfect dish for brunch. Serve alongside something sweet like apple butter brioche cinnamon rolls. For a savory side, pair with lentil-pecan breakfast sausage.

It’s not brunch without cocktails! So try a fun one to complement this cheesecake, like a cinnamon, pear, and rum drink, or a chocolate turtle martini. For something a little bit lighter, try a raspberry lemon mojito. 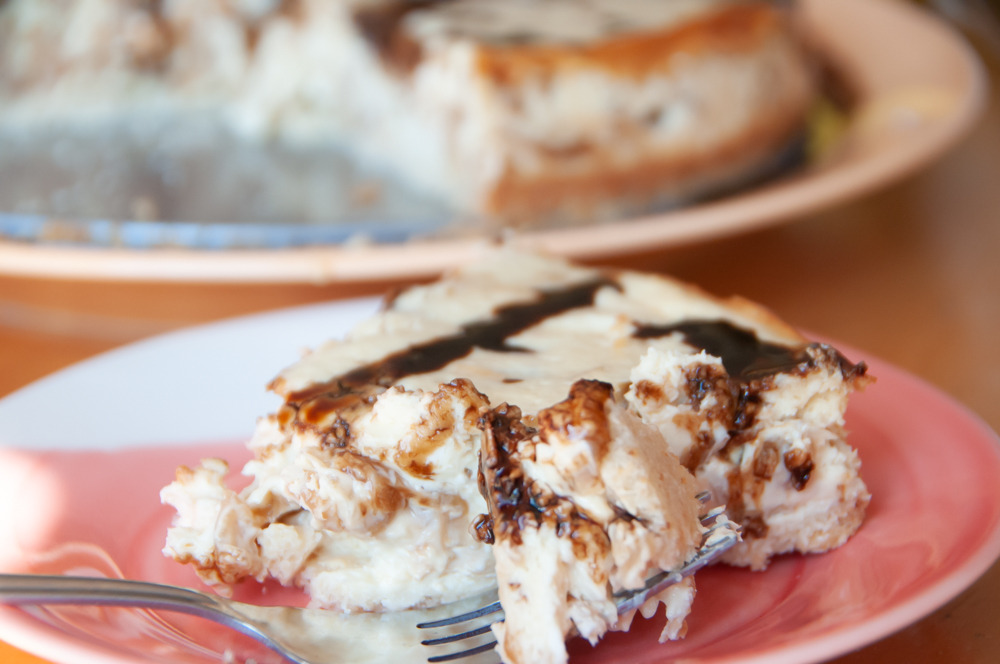 Use Up Leftover Ingredients 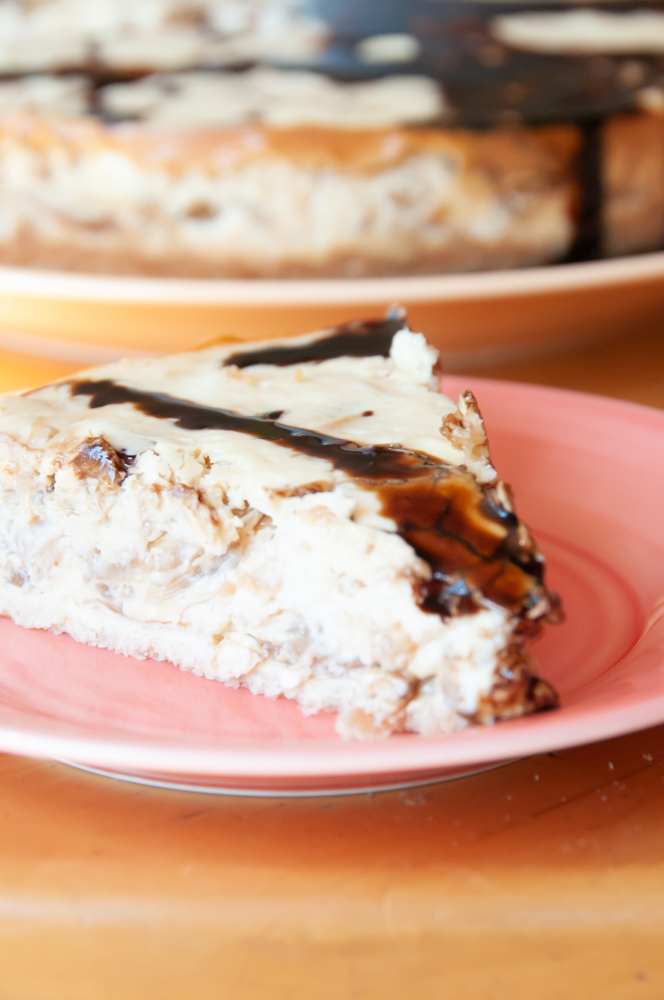 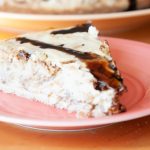 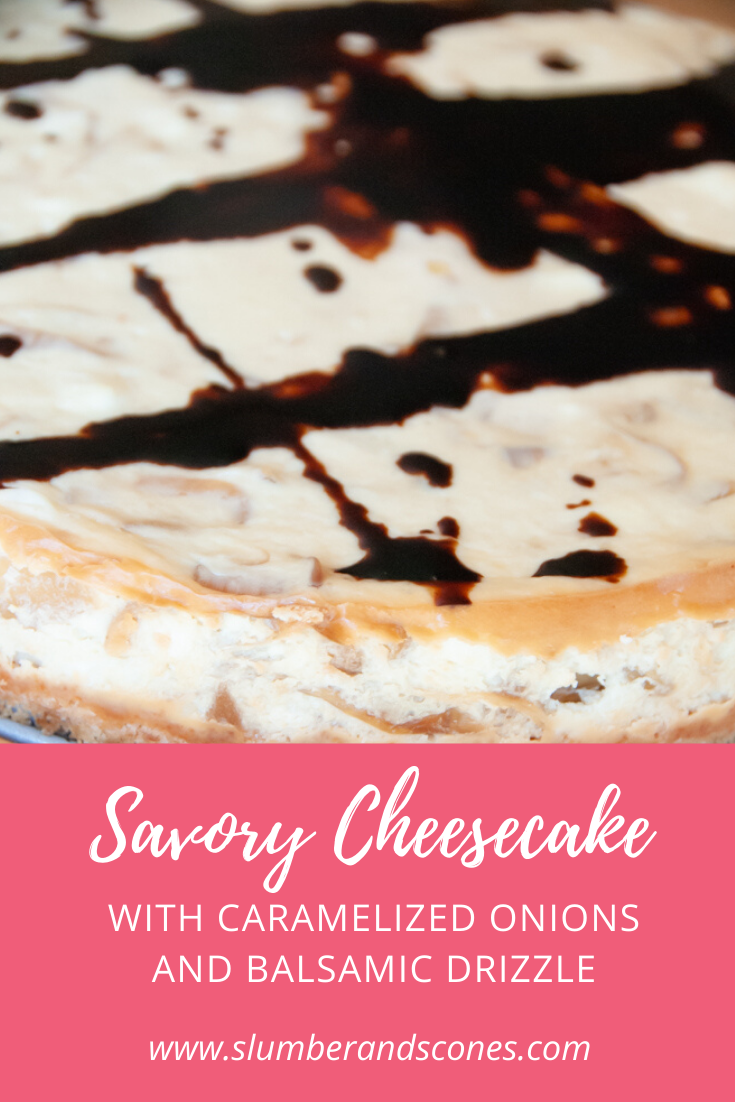 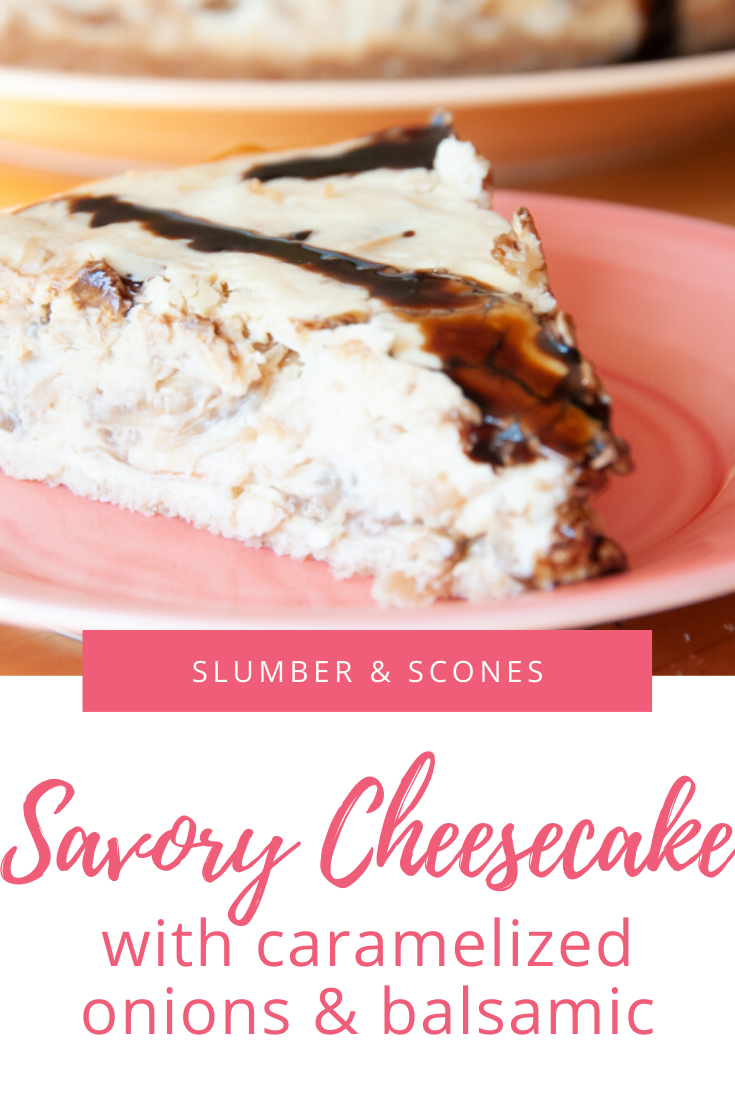 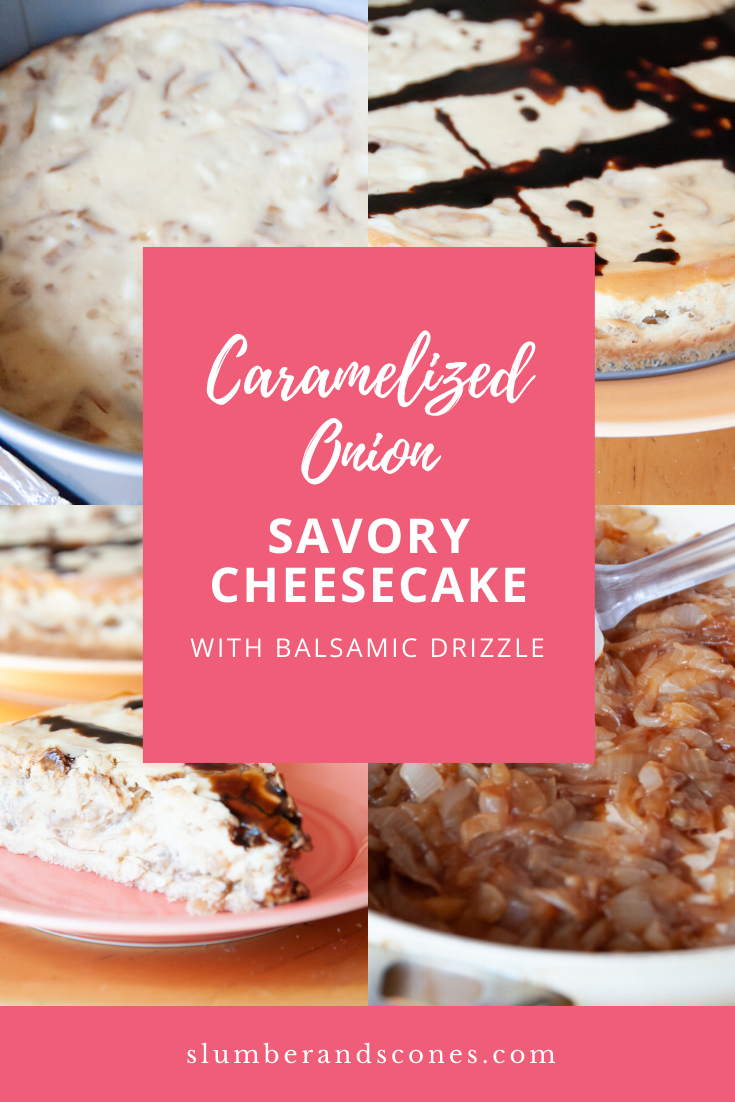 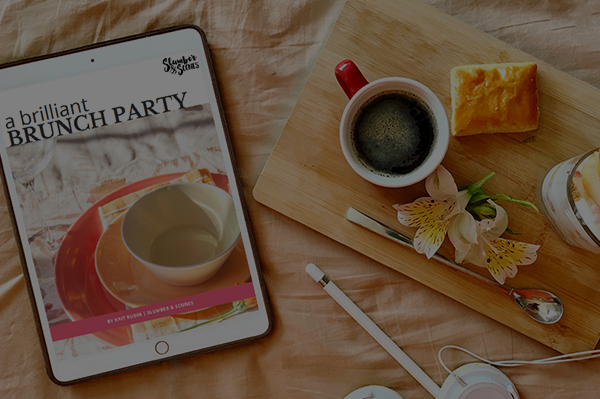 How to Host Brunch

Learn the five-step process for hosting a brilliant brunch party by downloading the free eBook! It includes all the info you need to figure out a theme, menu, guest list, seating arrangement, entertainment and schedule. Plus, get five theme ideas with full menus. 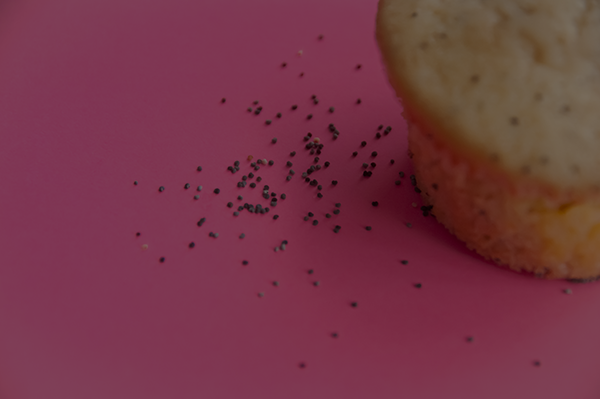 For more brunch recipes, hosting tips, and baking ideas, join our exclusive group on facebook, in Home Brunch Club. Share recipes, themes, tips, and more. Plus get access to exclusive recipes, guides, and videos from Slumber & Scones. I can't wait to see you there!

14 thoughts on “Savory Cheesecake with Caramelized Onions and Balsamic”

55shares
We use cookies (and not the ones we have tasty recipes for) to ensure that we give you the best experience on our website. If you continue to use this site we will assume that you are happy with it. OkPrivacy policy