How to Host a Tea Tasting

There’s nothing cozier than a cup of tea, except maybe drinking a whole set of teas with friends. If you love the idea of a small gathering of trying and discovering new flavors and features of tea, then you should definitely host a tea tasting this year.

This post contains affiliate links, which means I will earn a commission if you click through and buy something, at no additional cost to you! Learn More.

Tea is such an unassuming word for something so broad and complex. In the simplest terms, tea is a drink made by pouring hot water over the leaves of a plant, specifically an evergreen shrub that is native to East Asia. But more than that, it’s the most consumed drink in the entire world, after plain water. So as you can probably expect, there’s a lot to learn and discover about this well-loved beverage.

First, technically tea comes from the tea plant, but in this guide, we’ll also use the term to refer to similar drinks made from infusing hot water with flavors such as chamomile, rooibos, or other botanicals. This category is generally called herbal tea.

Like most culinary histories, the one around tea is also a little fuzzy. Tea drinking likely began in China, in the Yunnan province, and was used for medicinal purposes. What we do know is that it’s been around for centuries, developed into many different varieties, and has spread around the entire world.

How many people should I invite to a tea tasting? A tea tasting works best with a small group, about four to eight people is the perfect number. This gives everyone a chance to share the cozy, intimate gathering. However, if you want to throw a big tea-themed bash, go for it. It just may be a little bit less organized and structured.

How many tea samples should I have for my tea tasting? Any fewer than three, and it’s not much of a tasting. Any more than eight, and the flavors and aromas will be difficult to keep separated in your mind. The sweet spot may depend on the theme or style of your tasting.

How does a tea tasting work? The good news is that if you are the host, you get to decide how you want your tea tasting to work and how to design it. Do you want it focused on the history and culture? Or maybe you are more into the scientific composition of tea, and how it acts as both a suspension and a solution.

But it’s a good idea to start somewhere. Here are a few theme ideas for your tea tasting, and some teas that you could try:

What could be better than getting together with friends and family, and trying some fun varieties of tea? Host a tea tasting for a fun evening in!

Not all tea is created equal, and not all tea is prepared the same either. There can be a lot of nuance and opinions when it comes to the correct way to brew tea. From the water temperature, to the method of steeping, to how long to leave a tea bag in the mug, there’s a lot to think about. So let’s make it easy.

How to Taste Tea

You’ve done a lot of setup and preparation, and now it’s time for the fun part, the actual tea tasting! Before your guests arrive, set up the table with tea tasting note templates, so everyone can write down their favorite features of each tea. There are plenty of these available as printable downloads that you can start from: 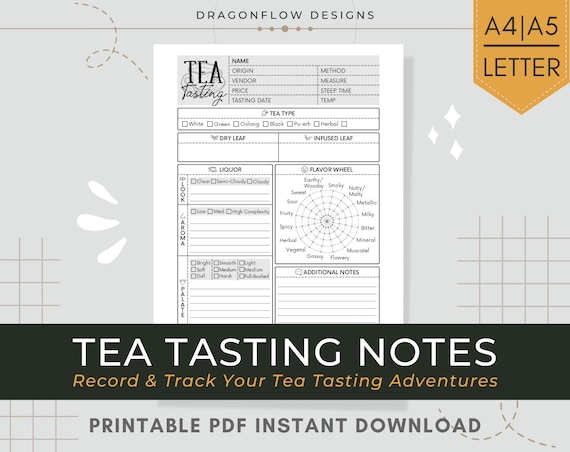 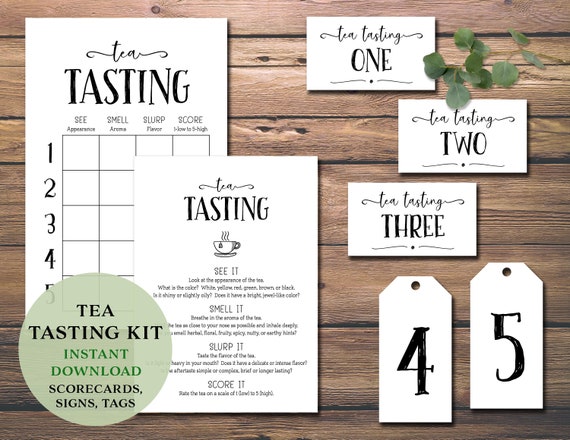 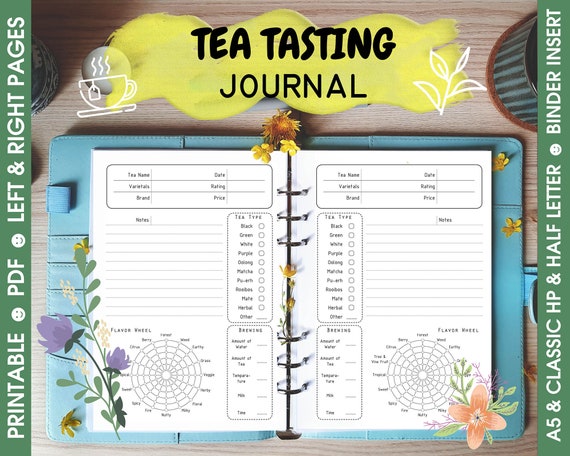 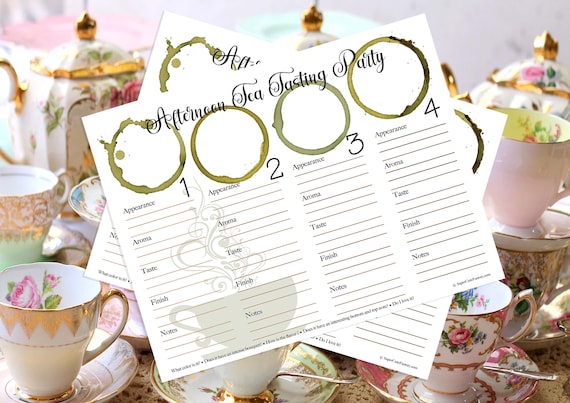 Next, gather your supplies. When you are simply enjoying a cup of tea, you can use your favorite fancy tea cups or mugs. However, for tasting, it’s important to have a neutral white backdrop that you can use to easily compare color and appearances. White will also prevent the color of the tea cup from influencing your perception of the flavor.

When you are ready to begin tasting each tea, follow this simple process:

Are you serving snacks with your tea? It can be fun to try to complement the flavors of the different varieties, or have something light as a palette cleanser. You could even feature treats that feature tea. In most cases, I like bite-sized sweets with my tea.

And when your tasting is over, don’t let your guests leave empty-handed. A small tea-themed favor can be a fun way to remember this event. Plus, if it’s something useful, they can continue their own tea-drinking endeavors. 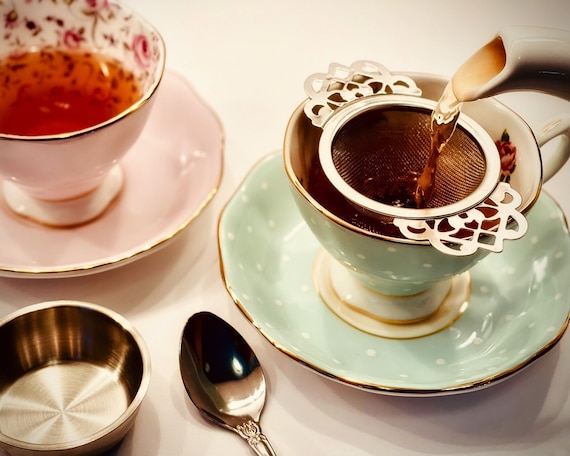 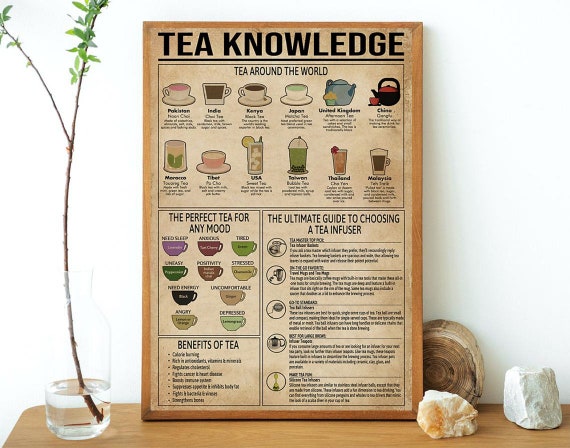 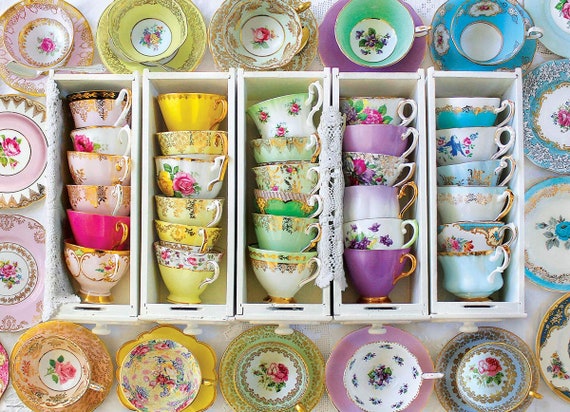 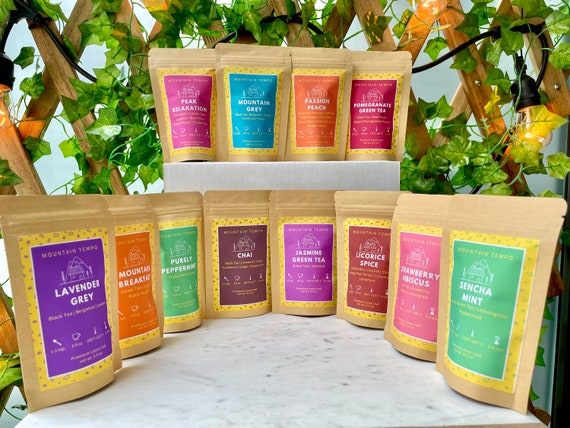 Download exclusive free eBooks and printable, like 5 Steps to a Brilliant Brunch Party, and Banana Bread Quick Twists. Plus view recipes not shared anywhere else, and get a free monthly newsletter with additional bonus content.

For more brunch recipes, hosting tips, and baking ideas, join our exclusive group on facebook, in Home Brunch Club. Share recipes, themes, tips, and more. Plus get access to exclusive recipes, guides, and videos from Slumber & Scones. I can't wait to see you there!

This website uses cookies to improve your experience while you navigate through the website. Out of these, the cookies that are categorized as necessary are stored on your browser as they are essential for the working of basic functionalities of the website. We also use third-party cookies that help us analyze and understand how you use this website. These cookies will be stored in your browser only with your consent. You also have the option to opt-out of these cookies. But opting out of some of these cookies may affect your browsing experience.
Necessary Always Enabled
Necessary cookies are absolutely essential for the website to function properly. These cookies ensure basic functionalities and security features of the website, anonymously.
Functional
Functional cookies help to perform certain functionalities like sharing the content of the website on social media platforms, collect feedbacks, and other third-party features.
Performance
Performance cookies are used to understand and analyze the key performance indexes of the website which helps in delivering a better user experience for the visitors.
Analytics
Analytical cookies are used to understand how visitors interact with the website. These cookies help provide information on metrics the number of visitors, bounce rate, traffic source, etc.
Advertisement
Advertisement cookies are used to provide visitors with relevant ads and marketing campaigns. These cookies track visitors across websites and collect information to provide customized ads.
Others
Other uncategorized cookies are those that are being analyzed and have not been classified into a category as yet.
SAVE & ACCEPT
43 shares
Loading Comments...